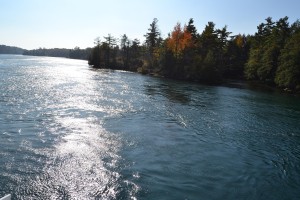 Lewis and Clark would be dismayed. The careful calculations they charted were of a forming and reforming Columbia River, which was destined to divide.

Swaths of explorable land forked the lake-like Columbia while heavy timber slowed the push of mist, rain and river. The ocean fought the flow of fresh water, diluting with low tide only to reclaim its mixture as the tide swelled.

The tide and the river’s pulse remain. With the felling of timber, the rise in soil run-off heaved the volume of the river. What the rush of spring melt had not washed away was suffocating in the sudden silt. Island swaths dwindled to stranded trees between muddy banks.

True, the onslaught of matter-dense river water will etch away the blunt tip of an island. And it is at the upstream the island gains debris with which it incrementally rebuilds itself. The trees march forward, sidling up to shore one another during the calmer months. The solidarity of trees’ roots claim any purchase—deadfall, rock and nutrients—that would otherwise escape the grasp of an island.

Then-maps will never match now-maps, or next-maps for that matter. The Pacific Northwest is a place set in its ways, however malleable the landscape.

Fresh off the Press…

When you need to know, where to go.

Everything on this blog is copyrighted by ©Sandra Davidson and may not be used without permission. Contact me at pacpack(at)sonic(dot)net for details.